1. Begin by brining the chicken. Add the chicken and buttermilk to a ziplock bag and refrigerate. As for time, I think it's best if the chicken stays in the buttermilk for 48 hours but overnight seems to be just fine, too.

2. Once the chicken has soaked up the brine, it's time to fry. Heat enough oil to cover the chicken to 360 degrees. Meanwhile, in a shallow dish mix the flour, salt and pepper and set aside.

Remove the chicken from the brine and let the excess liquid fall off. Dredge the chicken in the flour mixture, then back in the buttermilk, and then back in the flour again. Place the breaded chicken in the oil and let it fry for a few minutes until the center is cooked through and the crust is crunchy. Remove from heat and place on a paper towel. Sprinkle with a little bit of salt.

3. Turn your broiler on and build your sandwiches. Smear mustard on the inside of the bun, place ham on one side and cheese on the other. Place all the halves under the broiler until the cheese has melted and the ham has begun to crisp up. Remove from heat, put fried chicken breast in the middle and close. Serve immediately. 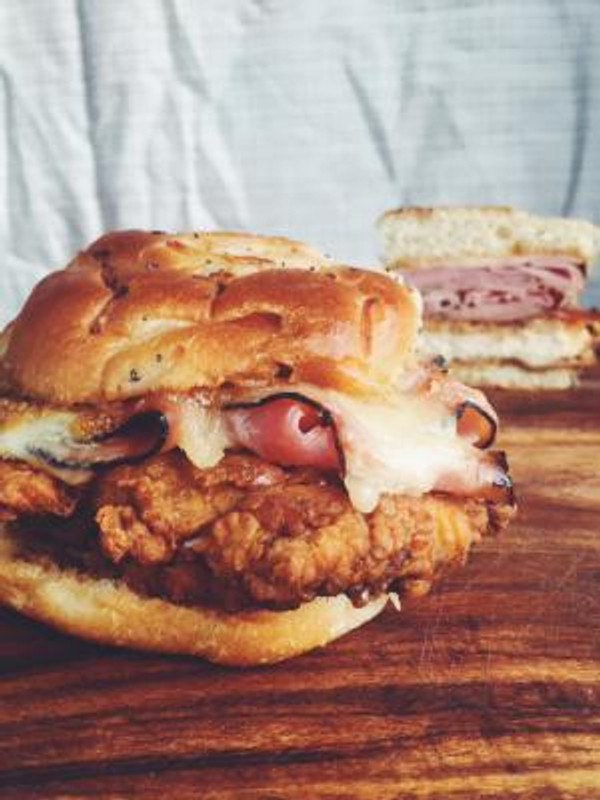