Golden Chanterelle Mushrooms are probably the most well known wild mushrooms. They're sought after by chefs and foodies due to their delicate flavor, which some describe as "mildly peppery."

Chanterelle mushroom is a distinctively trumpet-shaped wild mushroom with a color that ranges from vibrant yellow to deep orange. These mushrooms are prized for their superb flavor and fruity aroma, said to be reminiscent of apricots.

Though mild, Chanterelles have a slight peppery edge which holds its own against other ingredients in soups, stews and other main courses. While tender, the texture is firm and not crumbly. Their fragrant aroma, fine flavor and pleasing texture make them one of the most versatile of all mushrooms and have earned them a well-deserved place in kitchens around the world.

contact us for special requests / orders placed in advance preferred

This pleasantly aromatic fleshy wild mushroom shines like an exotic golden flower when seen from a distance against the drab autumn forest background. Also known as "golden chanterelle" and "egg mushroom," it has a magical appeal for most culinary experts in Europe, United States, and Asia. But all chanterelles are not alike. European and Asian forms are usually about the size of a thumb. In the eastern United States they are the size of a fist. But, ah, in the west they can be as large as two hand spans--from little finger to little finger. Chanterelles weighing as much as two pounds are not uncommon. 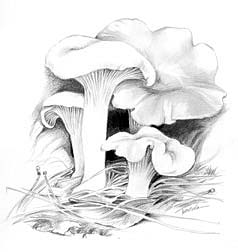 Europeans and easterners claim that their varieties are tastier than those from the West Coast and suggest that flavor is more important than thumb size. It has been a rewarding experience to try to resolve this argument. The reader may happily experiment with such savory adventures as are suggested in this book to discover the truth.

Chanterelles seem to be worth their weight in gold. They are golden looking, golden tasting, and golden priced. The cap is fleshy, with wavy, rounded cap margins tapering downward to meet the stem. The gills are not the usual thin straight panels hanging from the lower surface of the cap, as we see in the common store mushroom. Instead, the ridges are rounded, blunt, shallow, and widely spaced. At the edge of the cap they are forked and interconnected. The chanterelle's aroma is variously described as apricot- or peachlike. It is unmistakably different and identifiable.

Chanterelles will reappear in the same places year after year if carefully harvested so as not to disturb the ground in which the mycelium (the vegetative part of the mushroom) grows. There are yearly variations--some years more mushrooms, some less. They fruit from September to February on the West Coast and almost all summer in the east, sometimes coming up in several flushes. We think of them as promiscuous in their plant relationships, because we have found their mycelial threads intertwined with the roots of hardwood trees, conifers, shrubs, and bushes. They enjoy deep, old leaf litter. Chanterelles are seldom invaded by insects. And forest animals do not share our interest in them as food.

There is an off-white species of chanterelle, called C. subalbidus, the white chanterelle, found in California and the Pacific Northwest. They are found in the same localities as C. cibarius and we clean and cook them in the same manner as the golden ones. In general, they are more difficult to clean because of their fragility. They are seldom found in large numbers.

A black relative of the chanterelle, Craterellus cornucopioides, is unfairly called "the trumpet of death." Don't believe it--the black chanterelle is delicious. C. cornucopioides is difficult to spell and to find. Smaller in size than the orange chanterelle, the caps are funnel shaped and hollow all the way down to the base of the stem. It has been well described as a black petunia . Its dark cap, gray underside, and its habit of growing in dark places under shrubs make this secretive mushroom a challenge to find. There are a few equally edible look-alikes.

C. cornucopioides can be halved and easily washed off. The texture is crisp and firm, like the Asian wood ear mushroom, but it is much more tasty. Add it to soups or stews for texture and flavor. Sauté it in butter or chop and simmer in a white sauce, then serve on thin slices of toast. Many people dry these mushrooms thoroughly and grind them into a powder. This is sprinkled on top of foods or added to casseroles or soups for a rich mushroom flavor.

A Word About Purchasing Commercial Chanterelles

More and more golden chanterelles are appearing in marketplaces. They are expensive, so only buy specimens in prime condition. Here is what to look for:

This can be a chore. Chanterelles grow exuberantly. The cap margins fold tightly to form crevices from which it is difficult to dislodge debris.

The caps grow around twigs and brambles. Sometimes it is necessary to section portions of larger specimens to get at the foreign material. Use a toothbrush or a nylon mushroom brush to whisk away any surface material. In order to clean small particles of sand or dirt caught between the rounded gills, you must brush them under a slowly running faucet. Do not soak them. In general, the less water the better. Drain them on paper towels. They keep well if allowed to remain in a waxed paper or brown paper bag in the refrigerator until they are cleaned. However, cleaned chanterelles may also be stored in the refrigerator for a few days. They should be loosely arranged in a bowl lined with cloth or paper towels and covered lightly with towels.

Cut them into hunks of a generous size, so that the maximum amount of flavor can be appreciated. Chanterelles are meaty and chewy. One of the best ways to cook them is to slice and sauté them in butter. Cream or half and half and chicken broth are good additions. Chanterelles bake well and retain their flavor after long cooking. Eggs, chicken, pork, and veal harmonize beautifully with them.

After trying many recipes, we still prefer to cook chanterelles by baking them for 20 minutes in chicken broth with coarsely chopped onions. Serve this over rice or pasta. Potatoes will overpower the chanterelle flavor, as will many other vegetables.

Very few people eat chanterelles raw. They are peppery and upsetting, and they can make some people ill. In any case, their finest flavor can only be appreciated when they are thoroughly cooked.

Freeze chanterelles after sautéing with butter and onions. When defrosted, they will retain most of their flavor.

Dried chanterelles lose flavor and the texture of the slices becomes rubbery. A chef recently suggested that dried chanterelles reconstituted in water overnight retain more flavor if the soaking water is included when they are cooked.

To can chanterelles, clean them thouroughly and cut them in big chunks and steam for 20 minutes. Place the pieces in small canning jars and cover them with the liquid from the steaming vessel or boiling water to make up the difference. Add 1/2 teaspoon salt and 1/2 teaspoon vinegar. Finally, sterilize them for 40 minutes in a pressure cooker at 10 pounds pressure.

Chanterelles can be pickled with various spices and flavorings in vinegar, oil, soy sauce, etc.. They will keep for a week in the refrigerator.