(You save )
(No reviews yet) Write a Review

There are a few things you can’t escape at a LA farmer’s market or street fair: danger dogs (hotdogs wrapped in bacon served with girdled onions and jalapeños), tacos, and pupusas.  Pupusas are a delicious Salvadorian snack that is somewhere between a quesadilla and a cheese turnover.  Masa, in a dough similar to the one used for tortillas, is stuffed with delicious fillings and flattened out into discs.  The discs are cooked on a griddle, served with curtido, a cabbage slaw, and eaten very quickly for maximum gooey cheese enjoyment. I don’t know when it hit me, but out of nowhere I thought: Brie and Caramelized onion Pupusas!  You can basically fill a pupusa with cheese + anything, so this fancy pants version sounded too delicious not to attempt.  I included the ingredients for a simple bean and cheese version if you want to go traditional too. Enjoy! 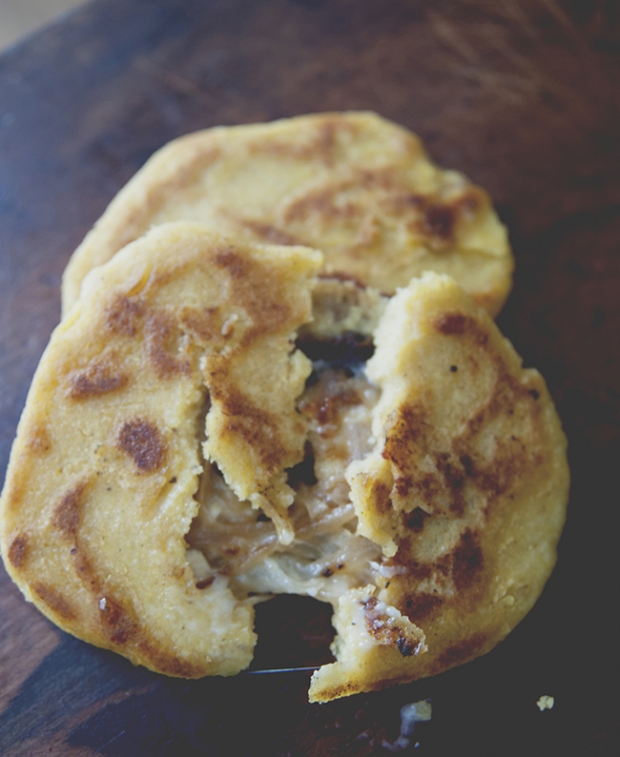 1 tablespoon vegetable oil or lard, for the griddle

Combine the masa harina, water and salt in a bowl until the consistency is that of dough, about 3 minutes.  It should not stick to your hands, but still feel moist. Form the dough into 6-8 balls, depending on how big you want your pupusas.

In another bowl, mix the caramelized onions and fig jam together.

Take one ball at a time, poke a hole with your finger and stretch the hole a bit, so it’s about 1 /1/2 inches wide and the dough is about 1/2 inch thick. Stuff 2 tablespoons of brie, and a big pinch of the onion/fig jam mixture into the hole.  Pinch the hole shut and flatten the dough between your palms. Clap it back and forth in your hands until you’ve formed a small disc, about 1/2 inch thick and 5 to 6 inches wide.

The goal is for the filling to go to the very edge of the inside, so every bite has some of the filling in it.  The key to this is making sure the hole is wide and the dough is stretched. Otherwise, you’ll have masa edges and a cache of filling in the center.

Heat up a pan or iron skillet over medium heat, grease with oil or lard, and cook the pupusas for 4 to 5 minutes on each side.  Look for dark spots to know they’re done.

In a large bowl, cover the cabbage and carrot with boiling water and allow to stand for a minute.  Drain well, then combine all other ingredients.  Taste and adjust the seasoning. Allow to stand for at least an hour. Toss again just before serving.